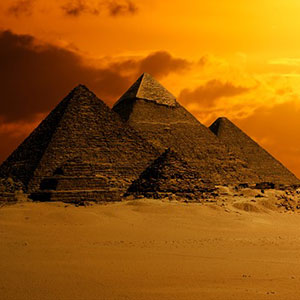 If you’ve dreamed of standing at the foot of the great pyramids, now is the time to escape to Egypt. Peruse the treasures of King Tutankhamun in Cairo, and answer the riddle of the Sphinx at the Great Pyramids of Giza. Fly to Luxor and embark on a Nile River cruise. You’ll visit the Karnak and Luxor Temples, and join in guided sightseeing at the Valley of the Kings and Queens on the Nile’s West Bank-site of noble crypts where the pharaohs rest in splendor in the cliff sides. Visit the Temple of Horus with its menacing black stone falcon statue, built 2,000 years ago during the age of Cleopatra. You’ll see fascinating sights before your Nile River cruise is complete, including a bluff-top temple to worship crocodile and falcon gods, the unfinished obelisk of the granite quarries of Aswan, and the Temple of Isis recovered from the submerged island of Philae. Take an excursion on a Felucca sailboat for a view of Kitchener’s Island and the mausoleum of Aga Khan. Fly back to Cairo and conclude your vacation with a farewell dinner to celebrate your guided tour of Egypt.

Aswan, Egypt’s southernmost city, has long been the country’s gateway to Africa and a prosperous market city on the crossroads of the ancient caravan routes. It sits at the ‘other’ end of the Nile not far above the Tropic of Cancer. It was a garrison town known as Sunt in ancient times and it was also important to the early Coptic Christians.

The Nile has Elephantine Island in its centre and this is where the main town and temple area of Sunt were located (the island was known then as Yebu, and later renamed by the Greeks). The temples and ruins here are not nearly as well preserved and impressive as those elsewhere in the country, but there are other good reasons to visit. The Nile is glorious here as it makes its way down from massive High Dam and Lake Nasser, and watching the feluccas glide by as the sun sets over the Nile is about as moving as any travel experience gets.

Cairo , the capital city of Egypt, has been the heart of Egypt for more than 1000 years and it demonstrates the dichotomy of all things Egyptian. Cairo is a timeless metropolis enriched with the unforgettable marks of a glorious past. It is in Cairo where the medieval world and the contemporary western world come together.The home of one of the seven wonders of the world – the Great Pyramids – not to mention the Sphinx of Giza and the Egyptian Museum of Antiquities, Cairo is a treasure chest of discovery, amazement, warmth & enjoyment.Islamic Cairo is the old medieval quarter, and stepping into its neighbourhoods is like moving back six or seven centuries with its tiny alleyways & mud-brick houses. Some of Islamic Cairo’s highlights include the Ibn Tulun Mosque, dating from the 9th century and one of the largest mosques in the world; the Mausoleum of Imam ash-Shafi’i, the largest Islamic tomb in Egypt where one of Islam’s greatest imams was buried.The Citadel, which is an awesome medieval fortress that was the seat of Egyptian power for 700 years. The Citadel has three major mosques and several museums.Coptic Cairo was originally built as a Roman fortress town. It pre-dates the founding of Islamic Cairo by several hundred years and was home to one of the world’s first Christian communities. It is, however, a holy place for Jews and Muslims as well as the Coptic Christians who lived there. The one remaining part of the Fortress of Babylon is a tower which was built in 98 AD and originally overlooked an important port on the Nile. The Coptic Museum is at the foot of the tower and its exhibits cover Egypt’s Christian era between 300 and 1000 AD. This stunning collection includes religious and secular art, and includes stonework, manuscripts, woodwork, metalwork, paintings and pottery.For shopping, the Khan El Khalily bazaar is a must.

The Temple of Horus at Edfu has a massive entrance pylon covered with sunk relief carvings. This Ptolemaic temple was constructed between 237 and 57 B.C.E.Once a year for the “Feast of the Beautiful Meeting,” Hathor traveled from Dendera to Edfu to visit her husband/consort, Horus. Her arrival was scheduled for the afternoon of the new moon. The statues of the deities remained in the mammisi or birth house until the end of the festival at the full moon. The result of their union was their son Ihy or Horus-Sematawy.

Luxor was built on the site of the ancient city of Thebes, and the magnificent monumental architecture and its excellent condition make Luxor one of Egypt’s greatest tourist destinations. For many hundreds of years people have been visiting the temples of Luxor, Karnak, Hetsgepsut and Ramses II. The Nile has feluccas and old barges that shuffle between the luxury hotel ships of the Hilton and Sheraton that cruise between Cairo and Aswan. Luxor Temple was built by Pharaoh
Amenophis III on the site of another Thebian temple and added to by Tutankhamun, Ramses II, Nectanebo, Alexander the Great and various Romans. Excavation work has been underway since 1885. The Temples of Karnak are a series of monuments that were the main place of worship in Thebian times, and they can be divided into the Amun Temple
Enclosure, which is the largest; the Mut Temple Enclosure on the south side; and the Montu Temple Enclosure. The Amun and Montu enclosure were once connected by canals to the Nile providing passage for sacred boats during festivals. Luxor is accessible from Cairo by buses or trains which run every day.

Prices are per person, land or cruise only, based on double occupancy. Offer subject to availability and change without notice. Some restrictions may apply. Please ask us for details.

Charges not included in the land vacation price: airfare to and from the start of your vacation; airline baggage fees including checked and/or excess baggage fees; Federal inspection fees for the Federal U.S. Customs and Immigrations; agricultural tax; other per person taxes imposed by government entities; applicable cruise taxes, fees, fares and port charges; passports; visas and vaccinations; transfers; tips to your Tour or Cruise Director, Local Host, driver, Local Guides, and/or ships’ crew; gratuities on ferries, trains, and cruise ships; laundry; telephone; minibar; alcohol, beverages, and food outside of the contracted menu as presented at a hotel or restaurant (these extra items will be billed to you before leaving the hotel, ship, or restaurant); additional excursions and activities not listed as ‘included’ in the itinerary; porterage at airports or train stations; Travel Protection premiums; and all other items of a personal nature.

Click on the buttons below to request a quote on this deal or contact us directly with further questions or comments.

Request A Quote Send To A Friend Have A Question? Contact Us

Send To A Friend

Please don't close or refresh the page while we are processing your submission
Please be patient, this could take a few minutes.